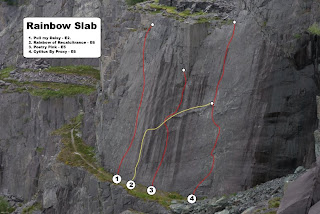 Well I feel that I am getting carried away with this best crag in the world idea, as North Wales seems to have way more than its fair share of these iconic and classic crags. I find it hard to see any gritstone crags that ‘stand out’ whilst there seem to be many crags that do in North Wales. I have been suffering from George Smithitus, in that I have failed to travel abroad or even out of Wales for some time, so I can’t deny that I am bias.

However Rainbow Slab is a crag with world renown as one of the most ridiculously bolted venues in the whole of the world. The term designer danger was invented on this slab by two its key developers John Redhead and Dave Towse, who apart from being broke and having balls the size of watermelons, also as legend has it wanted to keep there routes in line with Joe Brown’s two pegs a pitch rule, but using bolts instead!

Whilst the Red and yellow… route is the easiest, it has been years since i had the balls to solo this frightening line, so for a warm up I now use Pull My Daisy, and awesome route with a technically challenging and well protected lower half and an easy and run out to the moon top half. After that the next easiest route is Poetry Pink, I have given it E5, at which it is low in the grade. I believe that it is probably E5. Which is a debate in itself. 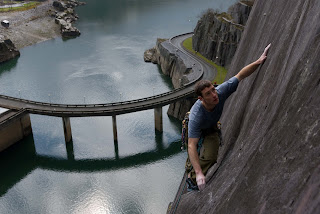 Although not as big a debate as the grade I have given to Cystitis by Proxy, which by calling it E6 will not doubt bring into question my ability. Well I have climbed the route twice, once about 10 years ago and once last year. In the intervening years a RP placement that although tiny and certainly not essentially, has disappear, meaning that there is nothing to help you psychologically to commit to the lower crux of breaking out from the thin crack. This felt ridiculously bold the last time I did it. A few people that have climbed the Cad and this route think that they warrant the same grade. However don’t expect the grades to stay the same. 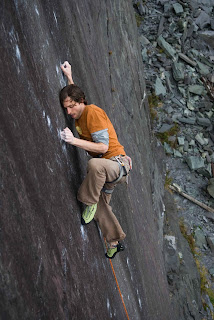 The very Big and the Very Small – The worlds hardest slab?

The final route I have put is Rainbow of Recalcitrance, one of the classic traverse line, that I have yet to climb, another project! The current guidebook from GroundUp is out of print however there is a new update on the rockfax app with many of the routes climbed since the guidebook was published.

The author knows the slate quarries really well, having authored several guides to the area. His knowledge means that you would have an amazing day in the quarries climbing many of the classic routes. Whether that is you being coached up them or being guided up them it is up to you.

So if you’ll like a tour round the quarries try booking on our Private Rock Climbing Guiding and Coaching Courses.