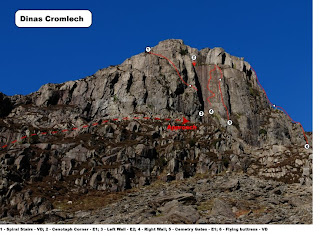 Whilst many crags in Llanberis Pass are strafed with quality routes and stunning lines, none quite match the beauty of the open book corner of Dinas Cromlech, home a selection of best routes across the grades in this Valley, if not the UK. 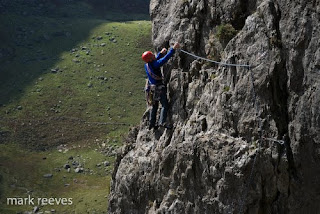 For Beginners there is both Spiral Stairs and Flying Buttress, both outstanding outings at the VDiff grade. Flying Buttress was first ascended by Menlove Edwards, a notable homosexual and pioneer of rock in the early years. Menlove originally called the route Sodom, but the Climbers Club refused to publish the route under that name so instead the name ‘Flying Buttress’ was used. Which if you think of it as Flying But Stress will tickle you every time you climb it! 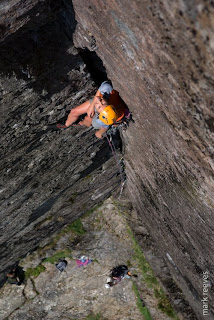 A Cunning rest of the uber classic Cenotaph corner

Above that grade there are several VS at the crag that are notably good, however the main events are the routes that surround Joe Brown’s ultra classic line Cenotaph corner, named along with its neighbour Cemetery Gates after the destination on front of buses (or was it Tram’s?) in Manchester. These routes often both get E1, however ‘The Gates’, is somewhat easier and the climbing more open, and being split by a belay on the girdle ledge, seems to make for a better climbing experience than the obvious corner. 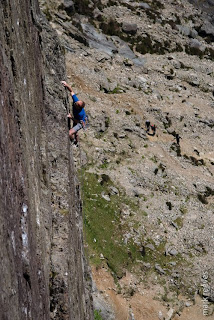 Martin Chester runs it out on Cemetery Gates

After you’ve ascended Joe’s classics, then most people become fixed on Left Wall as the next goal. Yet another *** route that follows a slender crack, that dog legs it way up the wall to the left of the corner. Most people make it easily up the initial crack, but place too much gear, so abundant and enticing are the placements. You need to remember to save some of your guns for the final crack. Where despite the aesthetic direct finish, most climbers shuffle out left to the arete on some convenient jugs, before flopping exhausted and elated on the belay. 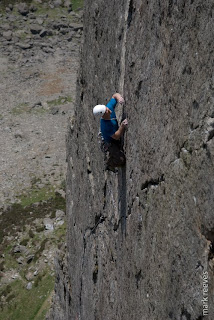 There are other bench marks on this cliff, Memory Lane, Foil and Resurrection that help bridge the grade gap, however none are as important to your climbing CV as Right Wall, I had put off this route for too long. After climbing it earlier this year after I was effective shamed into climbing it, I can say that the climbing is better than I could imagine, and the situation totally out there. 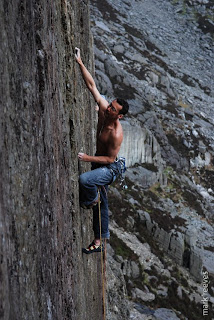 To say I was ready for this route was a bit of an understatement. I felt like I levitated up, and actually savoured every move. The crux headwall seem float by and before I knew it I was alone hanging on jugs looking down the coolest wall in the world. An up turned football pitch and for that instance I was David Beckham, basking briefly in my own glory before topping out.

My glory was brief as Pete went onto to climb Atomic Hotrod and Tess of the D’erbervilles both E6! All climbers are equal some are more equal than others! (which film I have just watch?)

For private guiding, instruction or coaching up any of the Cromlechs many classic get in contact with Snowdonia Mountain Guides, we have professional qualified instructors who climb from up to E8.